It all started for me with WINGS for Amiga 500 (1990) through Red Baron, Flying Corps, Aces over Europe, Aces over Pacific, Red Baron 3D, Full Canvas Super Patch and now Rise of flight and partly Il2: Battle of Stalingrad with Rise of Flight being the first sim in which I jumped into multiplayer action. There I found buddies from 1. Pulk Lotniczy – 1PL who showed me around in the virtual skies. Meanwhile, since 2011, I am flying with my squad mates in a very a successful virtual WWI squad among great and dedicated chaps.

Quickly I realized that demanding sims like Rise of Flight for example require demanding controls to improve once skills in the virtual sky. Since I realized that I ordered a Warthog along with Simped rudder pedals but still I felt something was not right about the Warthog, the stock Warthog is too stiff, too uncomfortable and therefore too imprecise for combat flying. At some point I found an extension post somewhere on SimHQ and wanted one immediately however as I was about to order one the guy who was offering them quit the service and well this was the time I decided to act myself … and this website and my products are the very result of that.

Now, of course I am using one of my extensions myself, actually often I am switching between the 7,5 cm piece and the 10 cm piece. If you need some really good advice just chat with me on FB or send me an e-mail and I will be happy to tell you more.

See you in the virtual skies! 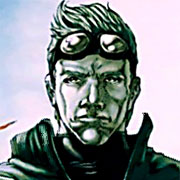